In 2002, our family of six first came to live in Moss, Norway for one semester. Paul would be teaching at the American College of Norway, a program through which Norwegian students could become accustomed to the American-style of study at the university level. Even though Paul would be teaching a couple of Geography classes in English, he had taken some Norwegian language classes at the University of North Dakota in preparation for this trip. Debbie had taken none. The children at this time were ages 8, 10, 12, and 14. They would be attending Norwegian public school during this semester, and the older two would also be continuing in their studies from their American school (in a few key classes) by mail. Their grades were 2nd, 5th, 7th, and 8th.

During this first trip, Paul wrote and sent several type-written pages every few weeks or so detailing various aspects of our life in Norway. We became active in a local evangelical church (Den Frie Evangeliske Forsamling), and our new friends there welcomed us with open arms. We traveled throughout Europe as much as we could afford–Sweden, Norway, England, France, Belgium, and the Netherlands. When we left the day after Syttende Mai–or Norwegian Constitution Day, a National holiday, we were not sure when we would be able to return.

Our opportunity came again, 12 years later, rather suddenly, in March 2014. Paul was asked by the person in charge of obtaining the professors for the American College of Norway if he was interested in doing this again. And would he be able to do so for the Spring semester of 2015? It was yes on both counts. All things fell into place job-wise for us to repeat our experience here, although this time, it would just be the two of us. Apparently, in 13 years, children grow up.

So, here we are, two empty-nesters out on an adventure in Norway! Technology and communication has improved in the past 13 years, so now, instead of emailing a letter detailing our experiences, we are writing a blog about them. Paul is working far more than I during this time, so I, Debbie, will be doing most of the writing.

We are so glad that you are able to join us in reading this little blog. Please leave a comment if you have a question or anything you would like to say to us. 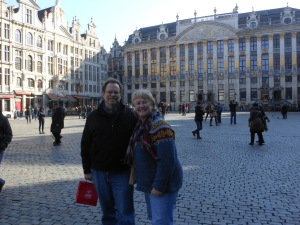 Paul and Debbie in the Grand-Place, Brussels.