[again, writing this one year later…makes for sketchy memories, that’s for sure.]

According to my pocket calendar from last year, we had four days left in Moss following our return from our Hyttetur. And, based upon my pictures from that time, we kept busy during those four days. There was church, packing up, Wednesday night Bible Study, and the dinner parties. 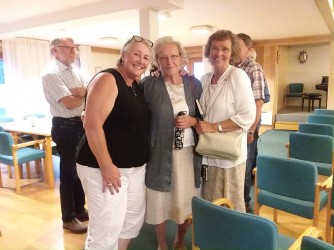 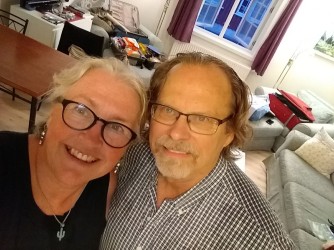 Our dear friends from Poland, Anna and Leszek, invited us and the Froholts to a feast at their home on one of these last nights. Anya is a terrific cook and hostess, and, if memory serves, her meal was stunning. She served a seafood bisque which featured, among other things, the largest clams I had ever seen. 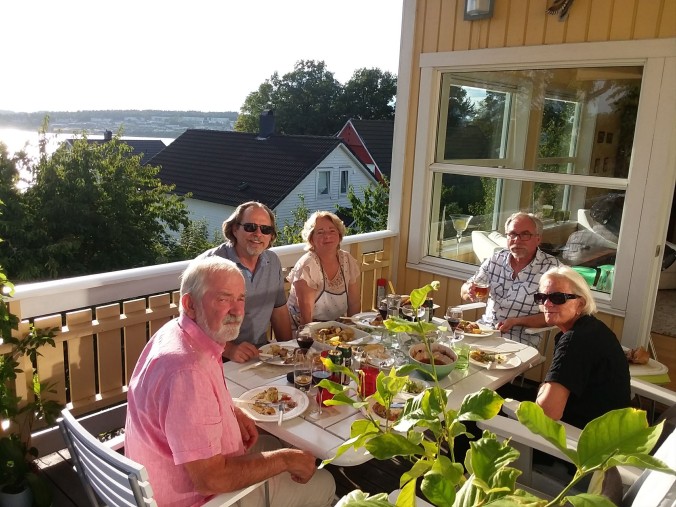 For dessert, she had created a lovely cheesecake covered with a bounty of fruit from their own backyard–raspberries and gooseberries and mint. What was especially memorable, though, was her collection of homemade liqueurs! She brought out a cart with a serving top in the shape of a world globe which opened up to tiny liqueur glasses and decanters. She served us raspberry liqueur, lemon liqueur, and, finally, a pine needle one that, I kid you not, smelled of the forest. She jokingly referred to her collection as her medicines–and, you know, I felt a distinct cough coming on! What a delightful time with friends. 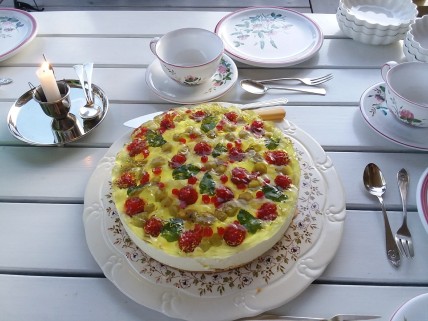 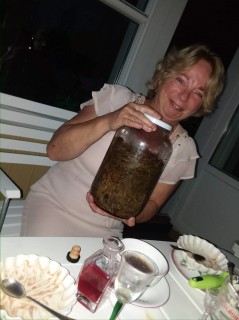 And, of course, Astrid and Asbjørn, the hosts with the mosts, threw us a going-away party at their place that week as well. The menu consisted of spekemat, vafler, sjokoladekake a la Maria, and diverse (whatever that meant). We all ate and talked for hours. 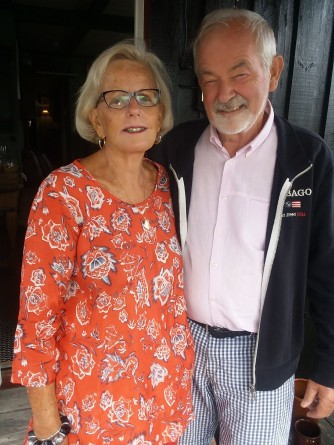 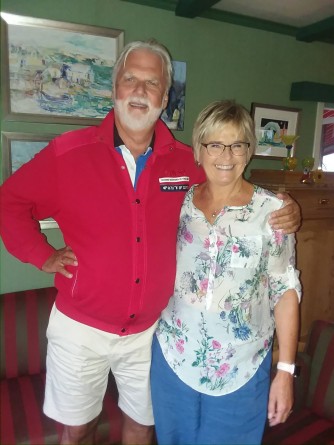 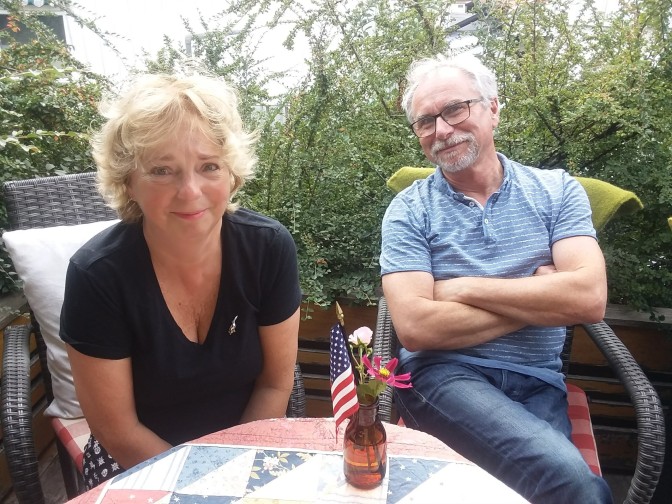 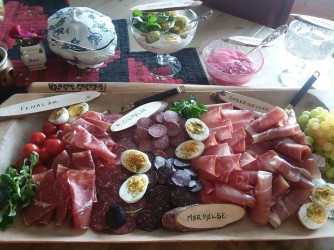 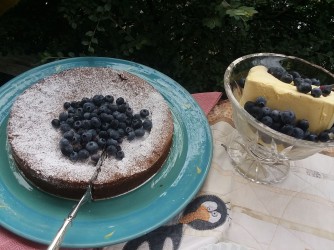 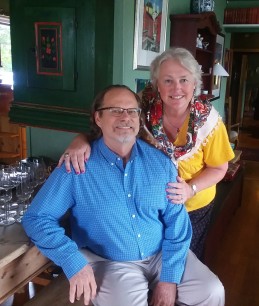 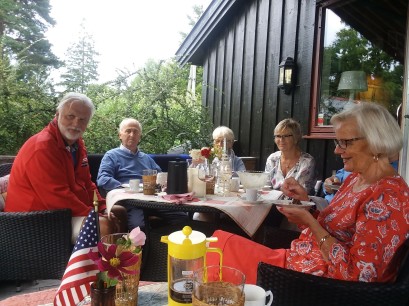 Finally, one last wing-ding was meeting Jorunn and Odd Olav at the Galleri F15 cafe near Alby Gård over on Jeløy one afternoon. We had not seen them since staying at their place in Sandnes back in 2015, and it was so good to connect once again. 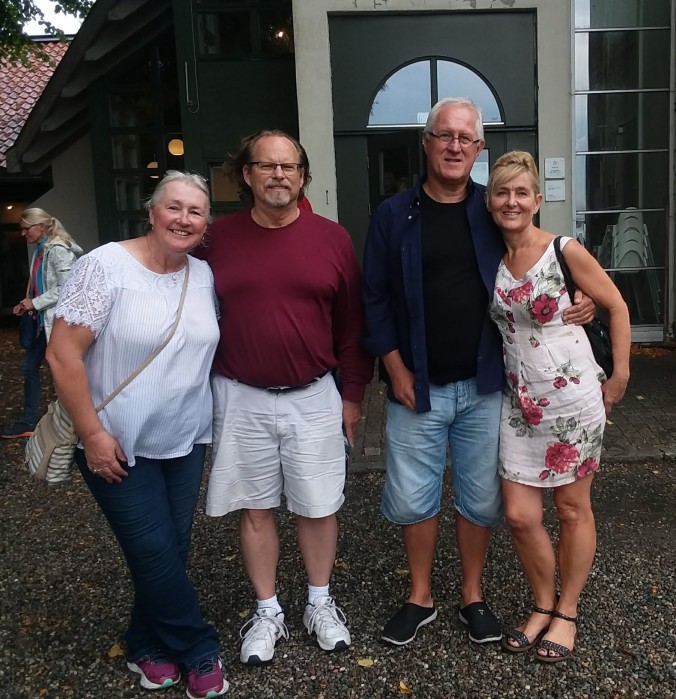 When planning this two month adventure, our goal was to spend as much time with friends as possible. I would like to think that we achieved that goal. We do not know when we will be able to return to Norway, but until then, thank you for listening in to our stories.

[disclaimer: I am writing this last blog post one year later. Wanting to create a book from this blog, and desiring a more complete project, I am finally finishing up our blog about our summer adventure. Like I mentioned earlier, life gets busy.]

The second half of this hyttetur consisted of a stop at the Gardnos Meteorittpark. Apparently a giant meteor crash-landed here eons ago and created a giant crater since covered up by Norwegian trees. We all had our very own private tour guide and we hiked up to the top of the park and meandered our way back down. She basically left us to our own devices–which wasn’t a disaster because there were wild berries to be found. 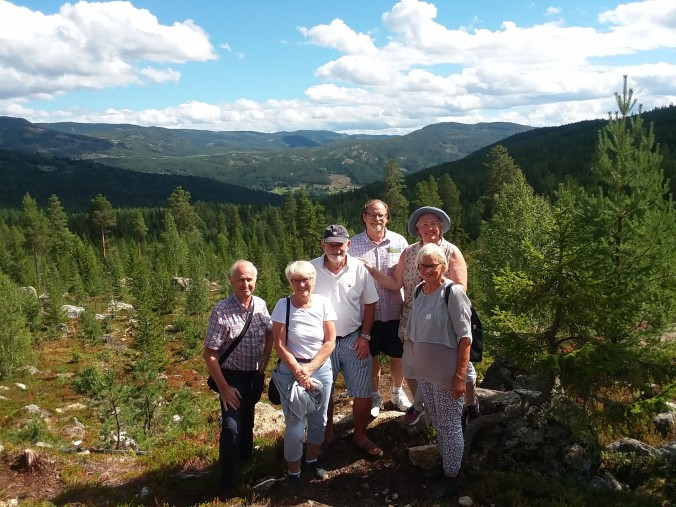 We arrived at the mountain hytte of Øystein and Ragnhild Ås overlooking the town of Ål on the edge of the Hallingdal region of Norway. Their beautiful cottage was build by Øystein himself, not surprising since he is the son of a carpenter. He showed us around, and we also got a view of his large stash of moltebaer, or cloudberries, a mountainous delicacy, able to be hand-picked a few months of the year. Whether or not he really had such a stash is up for discussion as no photographs were taken. 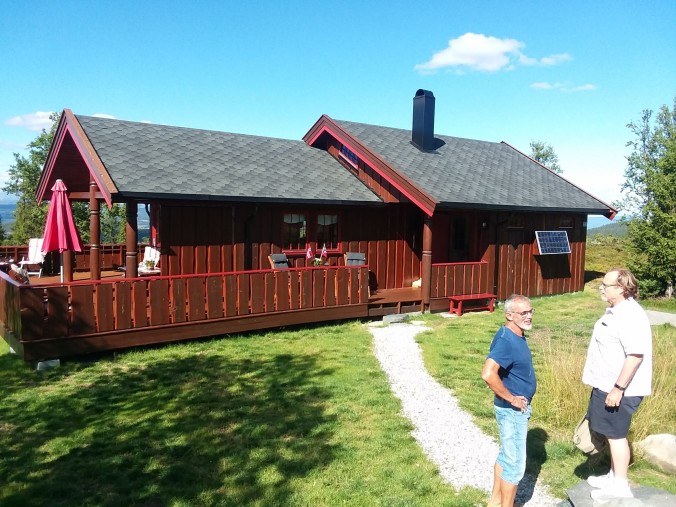 For dinner, it was all hands on deck, as we all helped in the preparation of grilled salmon (which Øystein caught himself), boiled potatoes, steamed vegetables, and sliced cucumber with tzatziki sauce. Chocolate almond cake and moltekrem, which I do have a picture of, rounded out our meal. 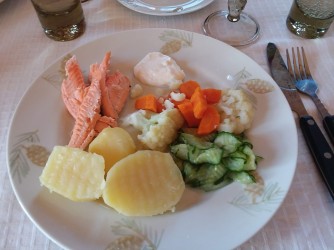 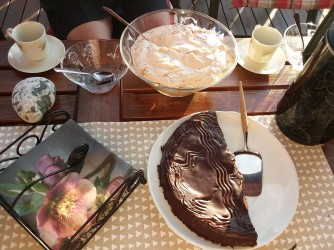 Our driving adventure the next day was to the Hardangervidda National Park–a large flat expanse of rocks, water, and low brush with few inhabitants and more sheep. Norwegians actually traverse this expanse and there are regularly-placed tourist-hyttes for these hikers. One such tourist-hytte, Fagerdalen,  served us the best rømmegrøt I think I had ever eaten. 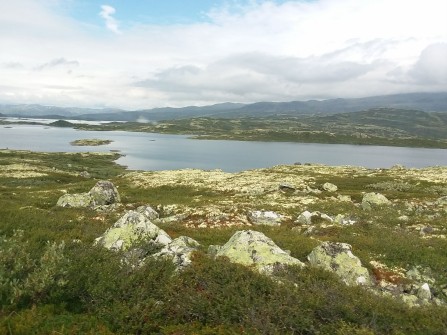 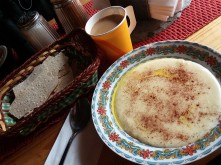 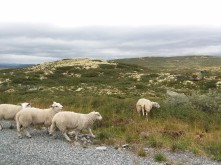 The last dinner on this memorable hyttetur was with ten of us–Otto and Grethe joined us as their childhood hometown was just a few kilometers around the bend. Following our dinner, Øystein was keen on showing us the view from farther up his mountain, so hike we did! Through neighbors’ yards, past bleating sheep, over rocks and white fluffy ‘reindeer food’, we all caught a view of the entire valley before us. 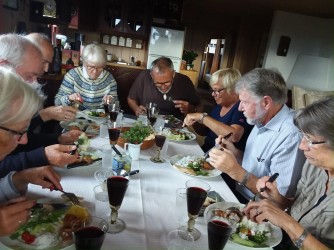 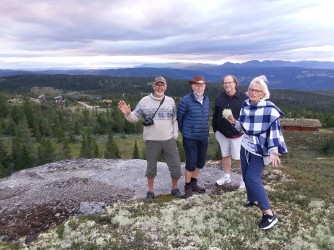 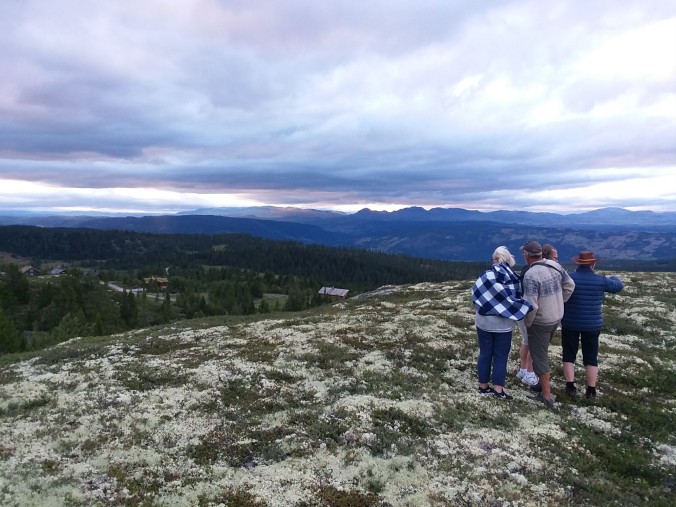 As the six of us travelers returned to Moss the next day, we made a detour via the fjells of the Hardangervidda and the town of Rjuken, which was famous for its heavy water plant during World War 2. 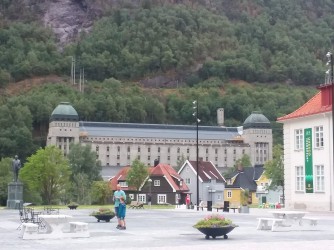 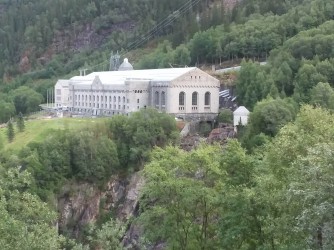