That was the name of our bicycle tour yesterday. “Oslo Off the Beaten Path”.  We decided to go with the company “Viking Biking and Viking Hiking”, (#2 of 63 Outdoor Activities in Oslo on TripAdvisor) and since we had been to Oslo several times, we decided not to go with their Highlights tour.  Yesterday was our 34th wedding anniversary, and a day in Oslo was a great way to celebrate. The weather was forecast to be sunny and 80 degrees. We had a couple of errands to run while we were there, and we wanted to have a nice meal (meaning sit-down and not a kabob-to-go as our children may remember was all we could afford in 2002 on our trips to Oslo), but, otherwise, no agenda for the day.

Our tour consisted of 15 riders, between the ages of mid-20s to mid-60s, and one local guide. He had actually been a cast member for Disneyworld  for 15 months–working at the Norway part of Epcot–so his English was quite good. We began our tour at 10 am, and expected to return at 1 pm. There was a small mishap during our tour (it wasn’t me!), a rider fell and scraped herself in a few places, so we returned a bit later than expected.  Fortunately, we had, on our tour, two nurses, an orthopedic surgery resident, and another health care provider, so the patient was well-cared for.  Oslo does have several hilly portions of the city, so there were a couple of times where I had to dismount my bike and walk it the rest of the way up the hill, but, man, that last portion on the way back was fabulous–breezy, downhill, and a safe bike path. The long portion of the tour where we followed the Aker River through town was also lovely–tree-lined, bike path, mostly flat, and with occasional waterfalls. 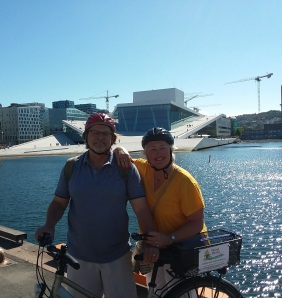 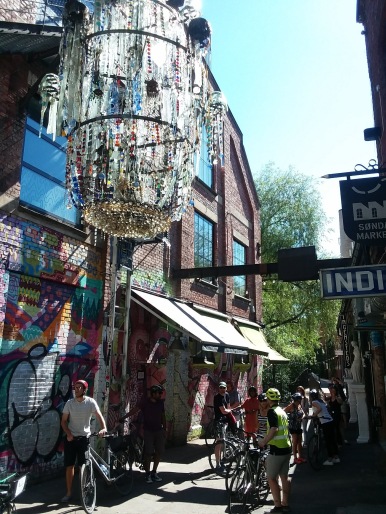 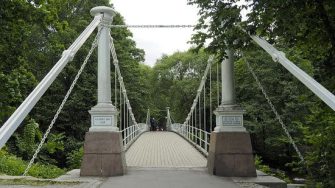 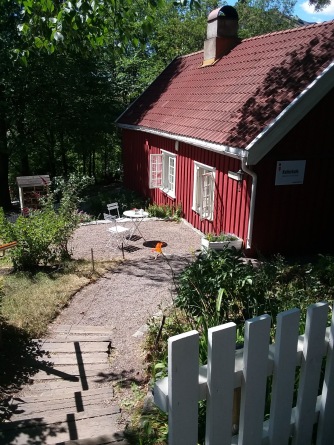 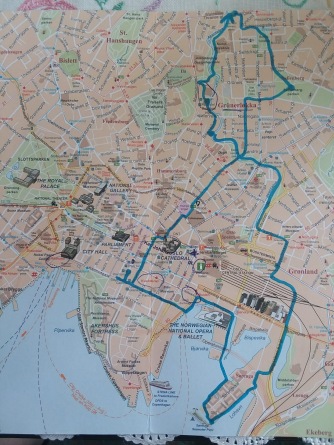 Paul and I have taken bicycle tours of Paris, Prague, and New Orleans, and we have found them all to be great ways to see a city from a different perspective. I said early on our tour that we had already seen places I had never seen on our previous trips to Oslo.  We can recommend this method of visiting a new city wholeheartedly.

The place we chose for our lunch, Albert Bistro,–rather late at 3 pm–was along the Aker Brygge where the ferries and harbor cruise ships dock, with the large, brick, city hall in the distance.  Since the World Cup is happening in Moscow, and Sweden and England were competing against one another yesterday, there was a waterside restaurant with a giant outdoor screen showing the game and hundreds of restaurant guests watching the game.  It felt good to sit down for awhile, fill up on water (we drank over two liters), and people watch for a bit. 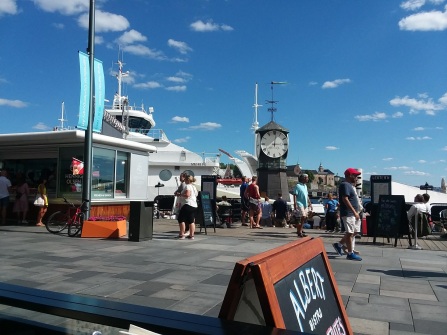 Our last errand for the day was to purchase a Norwegian item to donate for the Grand Forks Sons of Norway fund-raising raffle. Prices for high-quality goods are rather high, and I had done some research in Moss prior to this trip to Oslo so I would know what would be an appropriate item in our price range.  I remembered a good shop where Bonnie K. and I visited in 2015, and we were able to decide on a nice scarf. Yay, check that off our list! 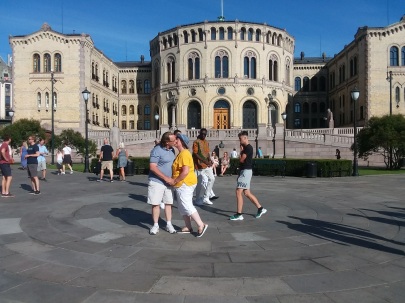 Finally returned home at 9 pm (we had left at 7 am!), and, as Paul posted on Facebook, we had logged in 18,977 FitBit steps through the day. Whew. I wonder if they count the 2+ hours of pedaling we did off the beaten path?

One thought on “Off the Beaten Path in Oslo”