We had planned to spend the few days prior to Easter up in Røros, a copper-mining town in the mountains north of Oslo. It actually took us about 7 hours of travel to arrive there, and we nearly missed the whole thing.

First we had to walk to the Moss train station to catch the first of three trains. Um, except we didn’t get (or understand) the memo that said that our train from Moss to Oslo was actually going to be a bus.

Yep, there we sat in the station patiently waiting for the time of our train’s arrival and departure…completely ignoring the three times that a bus driver made his rounds through the station calling for anyone going to Oslo, Ski, and the rest of the local destinations. Because we were waiting for our train. With but a couple of minutes to go before we thought our train was to arrive, we went outside to wait by the track. Only there are two tracks at the Moss station, so I went inside to ask the gal at the Narvesen (like a 7-11) which track our train would be on. She answered me in Norwegian, and I couldn’t quite make out what she was saying, so I feebly asked “På Engelsk?” So, she repeated, “No train. Bus to Oslo”. WHAT?? I ran outside and yelled at Paul to run and stop the bus driver, on the other side of the station, because we need to take the bus! Well, he did, and we got on our bus about 30 seconds before he would have left the station. Without us. Which, in turn, would have made us miss our connecting train in Oslo, and thereby forfeiting our tickets to Røros. Whew. [by the way, it  seems that our friends knew of this temporary switch. It occurred only over this Easter holiday period.]

Nearing the mountain town of Røros.

We arrived in Røros at nearly 2 pm, and immediately walked next door to the Tourist Office. Charming place with an equally charming and helpful clerk…who, after giving us directions to our pensionat (small inn) and several recommended restaurants in town, proceeded to inform us that the next two days are ‘red days’ due to the Easter holiday and that basically nothing would be open. Uh, what? This was just Wednesday, and we were only staying until Saturday. Who knew that the three days prior to Easter Sunday would be basically State holidays?  Hmmmm, that may put a crimp in our plans. But he assured us that the Røros Tweed Outlet Factory would most likely be open for another hour or so today. This was important to us because we had planned to buy one of these high-quality woolen blankets on this trip from the town in which they became famous.

So, we quickly walked to our pensionat and checked in–this was a delightful place I discovered online. It is the Solheim Pensionat, and had been built originally in 1937 for this very purpose. All of the furnishings and decor are from a simpler time, probably the 1940s-1960s. It was charming. And significantly cheaper than the other two, more traditional, hotels in Røros. 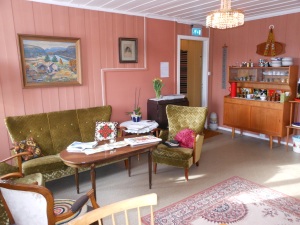 The lobby of the Solheim Pensionat.

We immediately left to walk to the blanket factory to finally choose our blanket, which, by the way, I had been passing by in a store in Moss for the past three months. There was a sign on the door of the factory, and reading  the sign on the door was such a disappointment. Apparently, they closed early today–at 1400. 2 pm. About 45 minutes earlier. Ugh. And we were not even sure that they would be open at all on Saturday before our train left at noon. Seriously, we were very disappointed. I know it was just a blanket, but we were also buying one for Paul’s brother and sister in law, so it was more than just a loss for us. Sheesh, this little holiday was fast becoming, I don’t know, just not what we had expected.

It was only about 3 pm now, so we decided to make the best of it and walk through the town to see the sights. Røros, the whole town, was made a UNESCO World Heritage Site in 1980, due to the historical and cultural significance of its buildings, mostly built from the mid-17th century to the late 18th century. Copper was discovered there in 1646, and the Røros Copper Works was in business from 1646-1977.

The Røros Church steeple among some of the old homes.

It’s a charming town through which to meander, up hills and through alleyways, over hill and dale,  yada, yada, yada. Of course we had to stop for a coffee and the requisite accompanying piece of whatever cake looked good. At this particular place, the Frøyas Hus, a piece of the ‘Verdens Beste’ apple cake was the cake of choice.

On the way back to the pensionat, we noticed that a rather large shop was still open, so we went in to see if perhaps they carried the famed Røros Pledd blankets. And they did! And they carried a large selection of them! All was not lost after all. (Yes, this is an exaggeration, I know.)

Our new blanket on our bed here in Moss.

For dinner, Paul had hoped to try some reindeer while up here in reindeer-country, and we found a pub which offered a nice dish of Rudolph the legendary meat. Since it was rather pricey, I ordered a lower priced dish, and we just shared the two, as is our custom.

Finally, to finish off our day of, shall we say, surprises, we return to Solheim Pensionat where a boisterous party is well into play. We had been informed earlier that there was to be a ‘trivia game’ in the lounge that evening. This sounded more like a very loud club. As we got ready for bed, nearing 11 pm, the music continued to blare easily into our room, one floor up.  Not seeing an end to this, I got up and went to talk to the owner. She was very understanding and offered to switch us to the apartment on the third floor. We accepted her offer.

Oh, my, it was like a Christmas miracle! That move of just one floor muffled the sound almost completely! And it was certainly nice to have the use of one’s own bathroom as well. As it turned out, we were able to use this apartment for two of our three nights at Solheim Pensionat, and we didn’t mind at all moving back to our cozy room for the last night. All in all, whatever lemons may have been tossed our way, turned into some mighty flavorful lemonade. 🙂 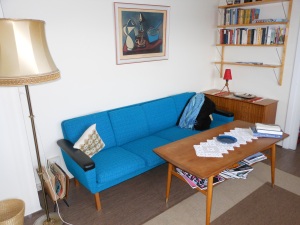 Living room of our newly acquired apartment in the Solheim Pensionat.