One of my insecurities is that I have always been a monolingual American. I mean, how hard can it be to learn a second language? Millions, maybe billions, of people speak a second language. Are they THAT much smarter than me? I have always wanted to learn a second language. I really believe that if I won the Lottery I would hire a private language tutor, buy/rent a cottage in some country – the south of France, a mountain/sea hytte in Norway, and live and speak among the native people for a year. Maybe that is why geography appealed to me as a discipline?
I had 3-4 years of Spanish in high school, but was never able to pursue it further. To this day, however, I can still hear a movie in Spanish and follow it fairly well, so I know that early access to a second language is critical for language acquisition. With this background I took my first Norwegian class in fall 2001, immediately prior to our first trip to Norway. After our return I took several (4-5?) other Norwegian classes, but I eventually ‘hit a wall’ in which I realized further progress would be impossible without another immersion opportunity.
So here is my return trip. Things are going pretty well, sort of. Some further background. First, my friends at the Summer Institute of Linguistics informed me that languages are ranked on a 1 to 4 level, based upon the degree of difficulty for English speakers. English is level 1, and Norwegian is level 2, so it should not be the hardest language to learn (Chinese is level 4 for an English speaker). Second, when you study Norwegian you are learning bokmål, a Danish-Norwegian version of the language imposed by the Danes for government business when they controlled Norway. It is only spoken in a limited number of areas. Most Norwegians speak a dialect from their home region – basically, west, south, east, mid, or north dialects. They are proud of their home dialect, and tend to retain it throughout life. By dialect, I do not mean just different accents (though they do sound differently), but also slightly different spellings, pronunciations, cadences, and the like. Third, Norwegian grammar is pretty basic as far as grammar goes. I think that two good classes would introduce you to all the tools you would need to launch out on your own. For example, you could conjugate a Norwegian verb on the back of a business card, in comparison to the 8”x11’ page of notebook paper you would need for a French or Spanish verb.
A few suggestions to learning Norwegian: (1) Find a Norwegian friend who is not a very fluent English speaker. People always gravitate to the strongest common language. Since Norwegians are the best non-native English speakers in the world, this will normally be English; (2) When you speak to a Norwegian friend, try to stick to one friend at a time. Jumping between friends from Vestlandet, Sørlandet, Østlandet, Midtlandet, etc. can drive you crazy because of the dialects; (3) Get a good dictionary and look up words as they come across your path in the flow of life. Words are easier to learn if you can associate them with something from life; (4) Go to church and listen to the pastor. I have a friend from college, Chris Crossan, who grew up in Austria and spoke German with an Austrian accent. I remember him saying that reading the Bible and hearing a sermon was the best way to learn a language, because you were already familiar with the content!; (5) Be fearless (frykløs or uredd – words I learned from Magnus). Learning a second language is no time to be shy.
Finally, be patient. Language acquisition is a process, not an event. It takes time, and the process never ends.
Now, if I could only get that lottery ticket! 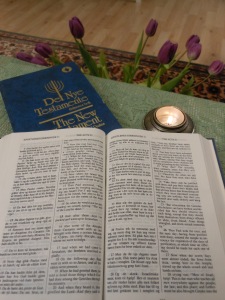 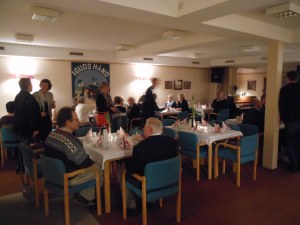 Discussion at a church party.

Personally, I did not grow up with a coffee table in our house. Most of my friends had one. All the families on TV seemed to have one; the Ricardo’s and the Mertz’, the Brady’s, the Huxtable’s.  But, we did not; we had a hassock instead. One cannot serve coffee on a hassock. I wanted a coffee table. I finally got one in the little apartment I shared with my three roommates at UCLA (shout-out to Susan, Patrice, and Carolina! :-)) Alas, we did not serve coffee on our coffee table either. We mainly used it as a place on which to spread out our textbooks. When Paul and I got married and were able to afford furniture (which was not right away, mind you), we got a coffee table (well, our first one was a free gift from friends, but when that one broke, we were able to buy one). And even we did not serve coffee very often on our coffee table. It’s a great place on which to put folded laundry for a family of six, though!

My point is this: Norwegians know how to really use their coffee tables. We learned this first 13 years ago, from the first time we were invited to the home of a new acquaintance (who has since become a good friend) and throughout our entire semester-long stay in Norway. They invite you for ‘coffee’; and what they really mean is ‘two-plus hours of conversation in my living room with our coffee table set with linen, our finest china, and several plates of home-made desserts and breads’. Don’t be fooled–expect this when you are casually invited for ‘coffee’. Seriously. Oh, and bring flowers. But that’s another subject.

So far, in the seven weeks we have been here, one or both of us have been invited for coffee in someone’s home six times. We have been invited for dinner seven times. We have enjoyed a time of fellowship at church (which, of course, included coffee and dessert/bread) six times. And we have hosted either coffee or a meal in our home five times. (really! I have it written on my calendar!)  When you hear that the Norwegians drink a lot of coffee, that’s true! And these dear folk are the most hospitable and gracious people you will ever meet! (Case in point: when you see a friend at church or come to their home again or they pick you up in their car etc, your first words are ‘Takk for sist’–Thank you for the last time’.)

What have I learned then from our second time here? One thing I would like to do: we will use our coffee table more. For coffee and hospitality. And when we do, we will use our best for our guests.

One can fit many people around a coffee table. 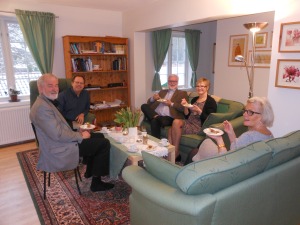 Sometimes a piano bench can be used!

The fire makes it very cozy (‘koselig’) around this coffee table. 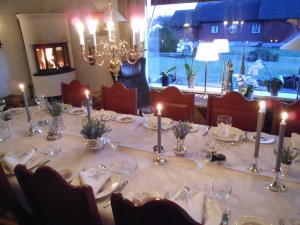 Not exactly a coffee table, but inviting nonetheless.