Yeah, like I know a lot of French. Hah! I do know enough to order a pain au chocolat, creme broulee, Croque Madame, and all the essentials of traveling in France. I think that you, too, could manage yourself quite well there.

Our second day in Paris started late because, well, basically, I am OLD! Even Paul, my darling husband of over 30 years, asked, I hope, in jest, “Where is that woman I married who would wake up early in Europe and roam the quiet streets in the dawn of the day?”

You left her behind in 2002 was the answer in my mind.

We wanted to see the Musee d’Orsay ‘first thing’, around 1 pm. 🙂 I think the lines have become longer since we were last in Paris. There was a queue that would rival Disneyland snaking around the courtyard at the museum when we arrived. One thing that has changed in us since our move to North Dakota 26 years ago is our ‘line threshold’. There ain’t no way we were going to wait in some random line for an hour and a half. We had heard, though, that one can bypass most of the museum lines by just buying their ticket in advance, so we decided to try again tomorrow, after we purchased our ticket at another place. 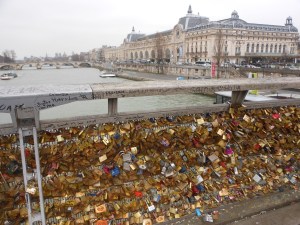 From the Musee d’Orsay, we walked across Lover’s Bridge. The museum is in the background.

So, off we went to L’Orangerie, another museum where we read that we could buy our tickets for that one as well as Musee d’Orsay. That one was closed on Tuesdays. No problem, let’s just roam over to the Eiffel Tower and then tour Victor Hugo’s residence in the Place de Vosges. One thing about Paris; to see it, one must be prepared to do some serious walking. 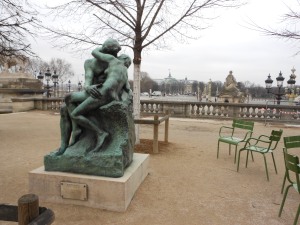 Sculpture in the courtyard of L’Orangerie.

The Eiffel Tower is rather amazing. It is larger up close than I would have expected. Yes, there are some lines and crowds, but the whole area is so big, I didn’t feel crowded at all. Of course, we had no plans to go up it, either, so that helped. We had taken the kids up to at least the second level back in 2002, and we ourselves had been up earlier in 1999. Paul’s goal for this visit was to obtain a pin for his vast collection of lapel pins from all over the world. He has been collecting these for maybe 15 years or so, and he is quite enthusiastic about it. Ask him about them sometime! Well, he was successful in his search! I really like it too! 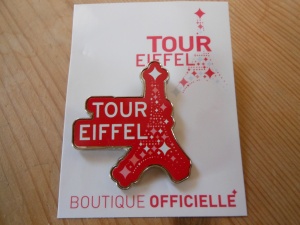 After the Eiffel Tower, we went to Victor Hugo’s residence in the Place de Vosges that we had learned about on our bike tour. The museum itself was free (!!), and the audio tour was a mere 5 Euros, so this was a score, I’d say. I only knew of Victor Hugo as the author of The Hunchback of Notre Dame and Les Miserables (as if that wasn’t enough!), but he was a much more prolific writer than that. I would suggest, if you are interested, to look him up and read a bit about him. For one thing, following his political exile, he returned to Paris and was considered the ‘father of the Republic’. Looking out the window of his apartment onto the Place de Vosges park, I felt as if I was looking at a scene that he himself may have viewed in 1883.

One of the rooms at Victor Hugo’s residence. 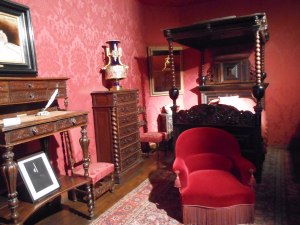 Victor Hugo’s bedroom. He would stand and write at the desk at the left. 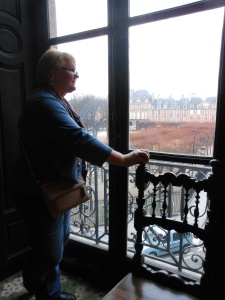 The view from his window.

I wanted to head up to Montmarte at this time so we could hopefully have a view of the city at dusk and eat dinner at a place with a view. We made the dusk part, and we went inside the Basilica de Sacre Couer while the nuns were singing. It is not a tourist attraction, but a real church, a place of worship. There was a guard right inside making sure that people were respectful while they visited this church.

Our cafe choice for dinner was on a side street on the way back down to the Metro. Again, we were one of just two parties having dinner here at this time. We sat by the window–alas, no view–but nice nonetheless. Le Paneme was the name. It was named for the people who lived where Paris is now way back when. I couldn’t help but think of The Hunger Games and the name of their capitol city, Panem.