I have heard horror stories about government workers and the government bureaucracy in Europe, but Debbie and I had a first-hand experience with them on Thursday, 19 February, in France.  Some background to the story first.  Debbie had made travel arrangements for our trip to Brussels, Belgium, and Paris, France.  This involved two separate train purchases on the SNCF, France’s nationalized train service that includes the TGV, their fast train service.

She made two SEPERATE purchases via the Internet on two SEPARATE times. First, she pre-purchased two TGV tickets from Charleroi, Belgium to Marne-La Valles (Disney), France for 12 February. Then, at a later time, she purchased two tickets for the TGV from Gard du Nord (Paris) to Charleroi for 19 February.  These were NOT a pair of round trip tickets, but two separate sets of one-way tickets.  She received a separate email confirmation for each purchase, two separate reservation numbers, and two separate charges to our credit card.  Each email confirmation told us to go to the train station and pick up the tickets prior to departure.  On the 12th we went to the Charleroi train station, showed our passports, and received our tickets.  The tickets had a single line written on them: Charleroi-Sud => Marne-La Valles.  We know enough French to know that they did not say anything like “Keepez-vous les billets pour l’returnee trip,” or “Gettez-vous maintenant les billets a les deux journee.”

The first leg of the trip went fine.  On the 19th, however, when we went to the Gard du Nord station and showed the email confirmation for the second leg of the trip to the lady at the desk she looked at her computer, and she told us that the tickets had already been issued and that she could not reissue another separate set of tickets.  We spent the next 20 minutes trying to explain the arrangements to her and her manager, but to no avail. The computer said … .  Incredible. The only ‘solution’ was for us to buy two new tickets at a mere 170 euros.  That was the only option the computer allowed.

Their attitude and approach was “We do not have a problem, we have your money. You have a problem and the only solution the computer will allow is for you to pay more money to cover our error.”  We still do not know what caused the error, but we are out 170 Euros.
This is government bureaucracy at its worst – a system that is slave to ‘le machine.’ They have the U.S. beat badly. By the way, North Dakota and Norway do not operate this way. 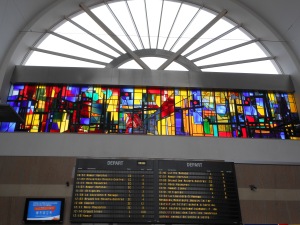